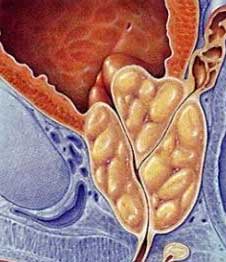 This diagram shows the nodules growing on the prostate. The nodules can restrict flow of urine.

Let’s break this down…

Hyperplasia means an increase in the number of cells.

Benign, in medical terms, is the opposite of malignant. It means that the hyperplasia is self-limiting, unlike a cancer.

Urinating is not normally painful, but can be.

The inability to completely get rid of all the urine in the bladder can lead to a build-up of bacteria and an increased chance of bladder infections. If the obstruction gets bad enough, it can lead to kidney failure, so early treatment is best.

The video below provides some background information on BPH.

During a rectal exam, your doctor will be able to feel that your prostate is significantly enlarged. They may even be able to feel the individual nodules. At this stage, a prostate  blood test called PSA is often ordered to help exclude any prostate cancer as the cause of your urination symptoms. A urine test is also performed to exclude a bladder infection. . We quite often also do an ultrasound of the prostate and kidneys, also looking for how well your bladder empties after you pass urine..

BPH will be seen in most men as they age, but only in some cases will it become bad enough to need treatment.

The exact cause of BPH is not fully understood, but there are a number of factors that we know can make BPH more likely. These are mainly concerned with male hormones (androgens) such as testosterone. In other words, male hormones have to be present for BPH to occur, but they don’t directly cause it.

Because we don’t have an exact cause for BPH yet, treatment is aimed at the symptoms. I will not go into too many details here because there are an awful lot of options, but basically, depending on the results of your tests, we will go down one of three paths:

Non-invasive treatment use medications to treat the conditions.

Drugs called alpha blockers decrease the “tension” in the smooth muscles in the prostate. This will allow the urine to drain more freely through your prostate. The main side effects of alpha blockers are dizziness from a drop in blood pressure. Some men also suffer from nasal congestion and problems with erections can occur in some men.

Another class of drugs called 5 alpha reductase inhibitors can block the conversion of the male hormone testosterone to it’s active form. this will result in a decrease in the size of your prostate, which will take the “pressure” off the emptying of your bladder. Some men on this medication can complain of flushes, loss of libido, tenderness or enlargement of the breasts (gynecomastia). However on the up side in can delay progression of baldness!

A drug called Duodart combines both of the above medical treatments into a single tablet. This is sometimes called maximal medical therapy, or combination medical therapy.

If the medical treatments fail, there are a number of surgical options that we can discuss. These variously use electro cautery or lasers to remove the middle of your prostate to allow urine to drain unobstructed out of your bladder. A common term for this treatment is called a “rebore” of the prostate.

Surgery is usually very successful in improving your bladder emptying. It is usually recommended for men with severe symptoms or men that have failed medical therapy.

Side effects of surgery include bleeding and dry orgasms (retrograde ejaculation). Incontinence of urine is uncommon, but loss of  erections can occur in some men.

I have been deliberately vague in this article simply because there are so many different options for this condition and I don’t want to steer someone one way or another without seeing you and completing all the tests we need to do.

I encourage you to make an appointment, either by call my secretary on 07 3834 6491 or by using my appointments page.